Before its entry into the museum, the piece was broken into five pieces and repaired. The breaks, along or through four of the five vertical perforations, were filled with a tan resinlike material, creating a banded appearance. The surface is stable, its upper surface layers mottled yellow-brown, with sporadic pitting, small chips at the edges of the breaks, and fine cracks overall. Yellow residue of degraded amber appears in cracks around the outline of the boar and behind the lions’ heads, around the lions’ eyes, and in their mouths and manes. After it arrived at the museum, the object was treated with amber-oil distillate, which probably darkened its color. The background area is more matte in appearance than the (shinier) boar. The piece is darkish tan to brownish red in ambient light and is a dark ruby-red in transmitted light. There are no visible inclusions.

In the central obverse panel of the flat, rectangular piece, a left-facing boar is carved in shallow relief (on the reverse, the central area is plain). The boar fills the panel, its forelegs extended widely, with its right foreleg back and its left forward. The rear legs are closer to each other, with the right hind leg at the back and the left hind leg forward.

The boar’s heavy head is in the relaxed position that is associated with walking; its chin is on the same level as its abdomen. The top of the head dishes in slightly above the snout, which is long and pointed. The large, squarish almond-shaped eye is set low in the face and is framed above by a heavy bulge. Only the lower part of the ear remains, the top obscured by one of the repairs.

A ridge of bristles extends from the forehead and appears to continue all the way to the lower back. Swellings at the shoulder and above the elbow suggest the animal’s powerful musculature. The full-tipped tail hangs down behind the animal’s hocks.

The heads of two open-mouthed lions, facing outward, flank the boar. While the lions’ heads are similar, they are not identical. The two obverse profiles are more carefully detailed than are those on the reverse. The head composed of the obverse right and reverse left is larger and more fully modeled; the ruff is more plastically rendered, and it has fully defined ears on both sides. The head composed of the obverse left and reverse right is smaller and more sketchily treated, and its volumes are simplified.

Despite all this, the two lions’ heads may be considered typologically to be of one style. The face is short and the muzzle is flat and slightly inclined. A bulge above the protrusion of the eye and the depression of the cheek below the eye socket are rendered naturalistically. The snout continues the incline of the head, but the nose tilts up very slightly at the tip. The muzzle is divided by an indented philtrum, and the folds are separated by four wrinkles. The lips are drawn back, revealing a set of small teeth, both sets of canines, and the gum ridges. The tongue is outstretched. The lower lip is boldly scalloped, and the chin is short and globular. A sharp indentation sets off the angle of the mane from the jaw. The collar of mane is wider at the top, tapering and curving inward at the neck. The individual hanks of hair, formed into unevenly shaped triangles, are set off from the face by shallow indentations but still give the impression of growing from the head; at the back, they are squared off. On the edges are the compacted frontal faces of the lions.

Engraved tooling lines are found on the lions’ manes, teeth, eyes, noses, nostrils, and muzzle wrinkles. Such marks are also found on the boar’s back and above its hooves. Linear abrasions (which appear to be file marks) are seen on the lions’ jaw flaps and manes, and scraping or abrasion marks appear around the contour of the boar.

There is no parallel for this plaque in amber or in any other material. It is one of three pre-Roman-period examples of figured amber plaques with low-relief carving. The two others are the Getty Addorsed Sphinxes (78.AO.286.2 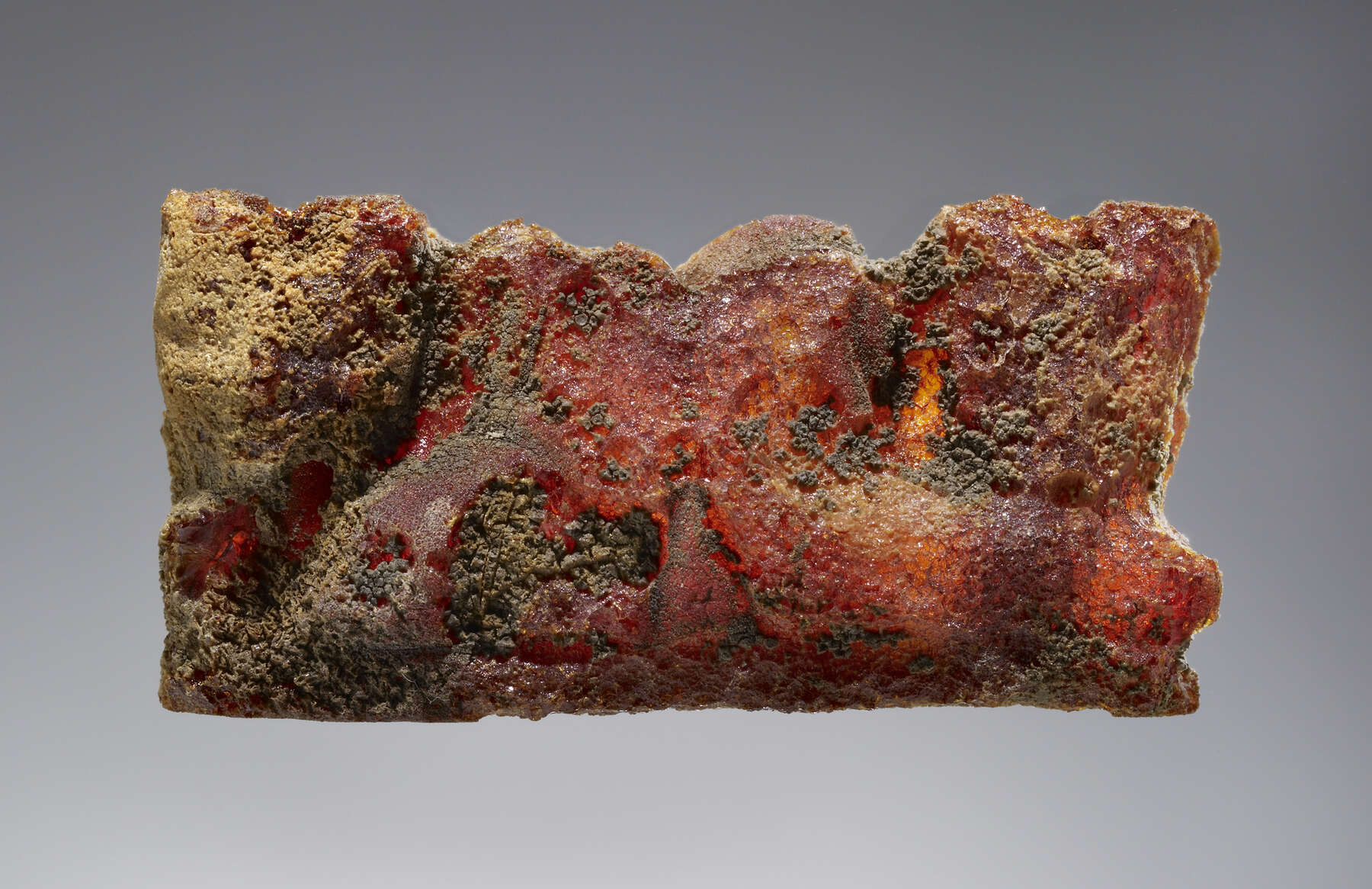 Cat. no. 28, cat. no. 28) and a hemispherical plaque with a recumbent boar in the Metropolitan Museum of Art.1 The Getty plaque is very like ivory carving and can be compared to a wide number of Etruscan ivory and bone plaques.2 In the modeling of the figures and the depth of the carving, the plaque looks back to the ninth-century ivory plaques, from Assyria and North Syria especially, made for insertion into furniture.

The lions of 77.AO.83 are generally comparable to a number of Etruscan lions of the Late Archaic, a large and varied group gathered together by W. L. Brown, with the closest parallels dating to the fifth century.3 In style and scale, the plaque finials are related to two small, possibly Campanian bronzes found at sites on the mid-Adriatic: a lion in Boston (from the marshes of Sirolo),4 which was once the rim or shoulder decoration of a lebes or another large, circular vessel, and a lion from a dinos rim from Amendolara (in Ancona).5 The bronzes and amber lions’ heads have in common facial shape and modeling, especially around the eyes, and have similarly scalloped flews, angular breaks at the jaws and mane, and flamelike locks.

From the same vessel as the Boston lion is a bronze boar at bay. It is related in type and style to the boar of 77.AO.83, as is the bronze boar votive from the extraurban deposit of Fonte Veneziana, Arezzo, in Florence.6 Each is sculpted with a sympathetic simplification of the features and softness and subtlety in the modeling. The boar of the amber plaque and the two bronze boars are the slim creatures of the sixth century, not the heavier-set creatures of fifth-century Greek gemstones.

The boar and the lions of 77.AO.83 are tame beasts. The boar gives little indication of its legendary strength or its viciousness when at bay; instead, the most dangerous beast to roam the ancient countryside and the fiercest adversary of the most skilled hunter trots meekly to stage left. The lions of 77.AO.83 make the motion of roaring but instead only drop their nutcrackerlike jaws, tamely opening their mouths.

Based on the form of the amber plaque, the horizontal orientation of the subjects, and the five large vertical perforations of equal size and placement that transverse it, it might be supposed that the plaque was part of a complex object. Strands must have run through the piece, with those above connecting to another section of this object, a necklace, or a fibula. Those below may have attached another section, or perhaps terminated in small pendants. Alternatively, the plaque may have been the main portion of a comb. If the body of a comb, it may have resembled the earlier ivory comb with sphinxes from the Tomb of Ivories, Marsiliana d’Albegna.7

Why the combination of boars’ and lions’ heads on an amber plaque? In northern Europe, in the Greek-speaking world, and in Italy, but not in Egypt, the boar was an especially important subject, in particular for protective purposes.8 It is common as a device on armor and figures as the subject of waterspouts (but only on the corners of simas). Lions could serve as protective and danger-averting symbols and represented the sun and regeneration. The boar was the most ferocious animal in the pantheon of the hunt. The most famous boars recounted in Greek tales were the ravaging boars of the countryside, best known from the important hunts organized to destroy them, which include Herakles’ killing of the Erymanthean boar and the hunt for the Calydonian boar. And as Ivan Mazarov notes,

Like the wild youth, the boar is a largely undifferentiated creature: it is both herbivorous and predatory, and although it lives on land, it prefers marshes and swamps. Since ancient times, the boar has been a recurring metaphor for the ferocious warrior. It has also signified death.… The boar could test the hero’s virtue. If he won, the powers of the defeated antagonist passed on to him. In Thrace, the principal adversary of a pretender to the Thracian kingship was the wild boar.9

The imagery of this amber plaque might have been suitable for both male and female owners. If it was found in a woman’s or child’s tomb, the association of the boar in the feminine realm would be of importance. The pendant may refer to Artemis in her aspect as Agrotera (or to the Etruscan Artumes). As the goddess of the hunt, the divinity roamed mountain forests and uncultivated land hunting for wild animals, including especially lions but also panthers, hinds, stags, hares, and boars. As a wild and fierce animal, the boar was regarded as a symbol of one side of the goddess’s nature, capable of unleashing sudden, violent destruction on humans and property, and her sacred buildings were often decorated with images of boars’ heads.10

The joining of lion and walking boar on 77.AO.83 is significant. The two animals are featured in combat or paired in calmer modes throughout ancient art. The subjects are common shield devices in Greek and Etruscan art, both individually and in combat. The two animals are also linked in one of the early stories of Greek myth: Adrastus, the king of Argos, had learned from an oracle that he must yoke his daughters to a boar and a lion. He then saw Polynices and Tydeus, an exile from Calydon, fighting. One of them had a boar painted on his shield, the other a lion. Adrastus immediately recognized the true meaning of the oracle, stopped the fight, and married his daughters to the combatants. In the Iliad, the combat of two great warriors is likened to that of a boar and a lion.11 Artemis, alternatively, may be the key to this representation in amber. She is associated with both wild animals and was a protector of women and girls, one of whom was likely the recipient of this amber. The use of boars and the pairing of boars with other animals of the hunt might have been the most powerful kind of “fighting fire with fire” imagery.